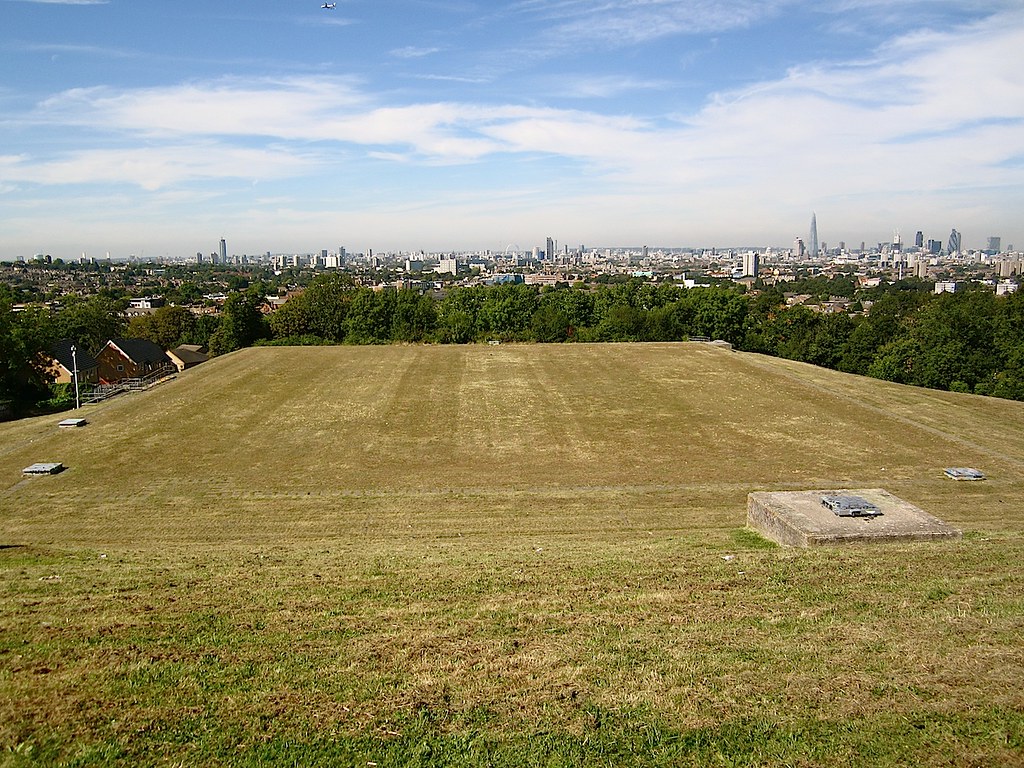 New Cross Commoners will host a public meeting at The Field, 385 Queens rd, about Nunhead Reservoir- bringing together many people who have a connection to the place- to share memories of a local green space which has been perceived as a common for many years.

Nunhead Reservoir was built by the Southwark and Vauxhall Water Company in 1855 and is now, since the London’s waterworks were privatised in 1989, owned and run by Thames Water PLC. Despite access being prohibited people have been going to spend time there, almost as if it were a public park, or a common, for many years. People would go up there to socialise, eating and drinking, barbecuing, – a major draw was the view- best in South London many people say. (I would agree)

In December 2014 a larger fence was erected inside the parameters of the original. It was at first still easy for people to get in- somebody had cut the spiral razor wire at the top and placed some rags over the top which could be climbed over. But now they’ve increased security- there are guard dogs patrolling and a security guard.

Thames Water probably have valid reasons for doing this. But some locals are understandably upset that what by now is perceived as a common has been so suddenly taken away. There hasn’t, as far as I can tell, been any dialogue between Thames Water and Nunhead locals, so nobody is completely sure of the exact reasons for the new fence. The only new signs are to tell people that guard dogs patrol the area. There is no notice explaining why, even though Thames Water know that people regularly used to spend time there- that’s why they’ve built the new fence after all.

The reservoir is an example of a space which until its recent increased securitization has been paradoxically liminal in terms of its private/ public status.  It’s been used as if it were public, and yet its private status has allowed it to be outside of state control- free from the ‘city officials’ who might also try to control it. Wide open space in this way is always in demand, and yet it being above a reservoir it is at least protected from being bought and developed on as expensive flats. Because of these two powers- the state and the market (in the form of Thames Water) turning a blind eye, many different activities have been allowed to happen at the site, from graffiti and taking drugs to yoga classes and dog walking. The fact these activities are both legal and illegal/perceived as anti-social is indicative of its status as an informal space- there was little police presence (unless they are specifically called there) and no surveillance. One twitter post described going to the reservoir and seeing kids burning a chair. Where else around here could kids burn a chair without being swiftly moved on, or arrested?

For me the (re-) enclosure of Nunhead reservoir represents many different struggles over the commons. For example, privatisation of water- Thames Water make vast profits out of our human need for clean drinking water- and is particularly bad at paying corporation tax. Secondly, privatisation of land- gated communities, council housing sell-offs and demolitions (see Aylesbury Estate) and the trend for private-public spaces such as Canary Wharf, Paternoster square etc can only lead to private-private spaces. There are many other things the reservoir symbolises – you can read more  in my essay I’ve attached to this post.  This is by no means required reading for the session- just a bit of background info in case you’re interested.

The meeting we’re holding does not have a set agenda. It will simply be a chance for all those who have a connection to the reservoir to meet each other, share memories, connect over a common cause and popular local space. I hope many people who love the reservoir will come, but also those who maybe live near it and are glad it has been fenced off for good for whatever reason. I am interested in how a space such as this polarises people as well as brings them together. I have posted flyers around the area so I hope there will be a mixture of people. We will see what happens through this meeting and go forward from there.

The Problem with Nunhead Reservoir; Trespassing on a Heterotopic Space of Resistance by Rosanna Thompson

This post is by Rosie, and the meeting will be facilitated by Rosie and other New Cross Commoners

New Cross Commoners is permanently under construction! It will change all the time: "we" don’t want to fix it before this “we” begins to recompose itself, before the “commoners” will gather and exchange ideas, experiences, desires, and before they'll learn how to do that… Still, there is somewhere and something to start with here: New Cross (the geographical boundaries of this area should remain open rather than regulated by postcodes) and commoning (a process of coming together and doing things together that differs from the private and the public/State controlled ways of doing things).